Skip to content
My obsession with hair began at the ripe old age of 6!! 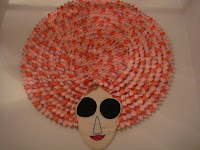 I used to draw hairstyles for my aunt to style on us (me, sister and cousin) one for every day of the week! Poor woman. altho she didn’t seem to mind. We had plaits (braids in America), updos, curls, and other creative looks going on. But it wasn’t until one day I got hold of a pair of my mums nail scissors that I decided to have a go at cutting!
My brother was on the other end of those scissors as I tried to sculpt his fringe out of his eyes! As you can see from the result, It was clear I had natural talent, hence the beginnings of my long career!!!

Me, Brother (middle) and sister(right)