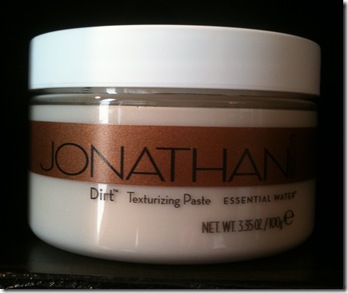 I wanted to mention DIRT by Jonathan Antin because I spent abit of time watching him on his Bravo show ‘Blow Out’ and even with his few dramatic temper tantrums and sulky moments and despite his egotistical reputation, I found him to be a very likable person , and I ended up following him through the whole process of building up his salon and starting up his haircare line which I must say inspired me too.
DIRT was a big success from day one, and so I had to give it a try, I found it was a great consistency to work with, for short, medium or longer hair, altho I would tend to use this on short to medium. It gives the hair a matte, messy, textured look that held well. What’s good about it is the ease of washing it out, water based, it washes out easy. For those of you who dont’ like matte looking hair, Jonathan has just brought out another product with shine to it.
So well done Jonathan, who’s shown he’s not just a pretty face!