Fascinating what people find to do with ‘cut ‘hair. Here’s an article featured in ‘Ananova’ newspaper…

Hairdresser builds model out of hair

A Chinese hairdresser has created an incredibly detailed model of a Beijing landmark out of hair collected in his shop. 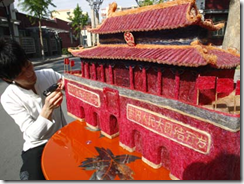 Huang Xin, who lives and works in Beijing, took more than five months to make the model of the Tian’anmen Gate Tower in Tian’anmen Square.

Huang, who has been a hairdresser for more than 10 years, said he used only women’s hair because it was softer.

After washing and dying the hair, he glued it on to paper and then rolled it into different shapes to make his model of the tower.

He has also made toys out of human hair and a model of the famous Bird’s Nest Olympic stadium in Beijing.

4 Replies to “What else to do with cut hair…”