There is a difference in drying curly hair with and without a diffuser.

If the hair is diffused, the air flow from the hairdryer (even tho less than a normal dryer flow) gets into the hair and roots more, therefore lifting the hair away while it is drying, thus leaving the hair airier and curlier. The steady air low does not disturb the curls too much unless the air low is too strong or you have fine hair involved.

If the hair is air-dried without a diffuser, the water in the hair, weighs down the hair while it is drying, therefore unless you remember from time to time during the drying process to squeeze the hair up, the hair will dry flatter but still defined.

It may seem strange to you that the first product I’m gonna review isn’t exactly a hair product, (well, not the hair on top of the head anyway), but I just felt the need to share with you all as soon as possible………

Were talking about eyelash hair, I have to go on the record to promote an amazing treatment that leaves you with MASSIVE long lashes!!

The Product – Lilash – one of many brands that claim to give you long luscious eyelashes, well, trust me, they were right, after using the stuff for 3 – 4 weeks, I watched, as my usual stumpy eyelashes grew and grew!!

We all know that Asian eyelashes fall way behind everyone else in the lush department, and I have tried everything from mascaras to fake lashes to individual lashes and perms,(Yes, abit obsessive I was) but no more, I have told ALL my friends and family and now everyone is happy with their ultra long lashes!

Another group of cool hair around the city, feel free to send me any pictures you want posting of friends or family who you think have cool mops. Send it to jules@juleschan.com

It has come to my attention that my Flat Head article has now become one on Butt Cracks!! I would like to say that having a flat head is in no way related to having a butt crack swirl on your head. Everyone has a crown/swirl (or bald spot which it has been called) at the top of the head and no matter how flat or round your head is, the swirl is still there. Sometimes the swirl can make the head look flatter because of the way or direction in which the swirl moves. 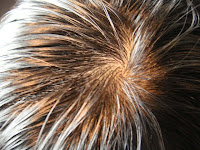 I would like to share some of the work we do on a daily basis in Dekko salon. Here’s a before and after client.

Minnie came in and was fed up of her long hair, she needed to look more professional as she was going to be practicing Law. She also needed to be able to loosen it up a bit after work, so she wanted to be given a versatile look that she could play around with. 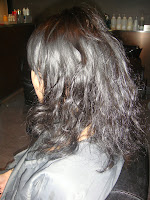 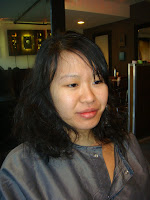 Here’s Minnie before the haircut.

We decided to cut the hair to jaw level and because her hair is quite fine we graduated the back so it would lift the hair up and make it appear thicker. The ends were chopped into to give the hair more movement and then we gave her a more definite fringe to make the look stronger. 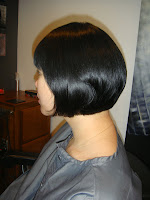 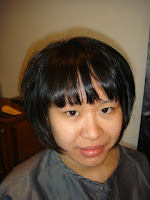 The look of a lawyer! 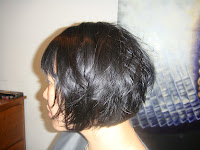 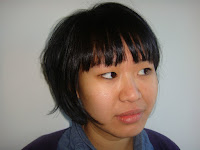 After applying some extra hair products we gave her a more casual messy look.
Thanks Minnie.

For Minnie’s look, the hair was cut using scissors, her hair was too fine to use other tools such as the razor or thinning scissors. All the edges were cut with texture with no blunt lines, this is to create softness rather than a hard look.

For the neat look Prive Weightless Amplifier was used.

And for the messy look we used Prive Texture Spray.

Quote –‘As every woman knows, a bad hair day can pretty much ruin your entire mood. But for Cheng Shiquin, they must be devastating. Shiquin owns a beauty parlour – but somehow manged to avoid a haircut for the last 16 years. She was pictured showing off her hair – which is 8 feet long – in south west China’s Chongqing municipality this week. It take 2 hours to wash her hair and another hour to comb it.’

‘Despite the extreme lengths Shiquin has gone to in order to achieve her long locks, she does not hold the record for the world’s longest hair. That title belongs to another Chinese woman – XieQiuping. Her hair is a mind-boggling 10 feet longer than Shiquin’s, measuring 18.5ft in 2004. She began growing it in 1973 at the age of 13.’

Here’s my very own measly 3.5 feet of hair in comparison to Shiquin …… 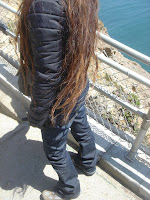 I just want to say how great it is to be working in Dekko Salon http://dekkosalon.com/ with all the fab staff in there. And we have sooooooo many cool clients who come in and let me take their photos. This makes it all the more possible for me to be writing this blog with the help of our great stylists Jill, Joni, Jodi, Lucky and whoever else wants to help. Thank You girls……

And of course, lets not forget Claudia, tech support!

Ever wondered what we can do with all that cut hair that salons produce on a daily basis?

Well, one of the most environmentally friendly things that salons can do is to donate their hair clippings to a company called Matter Of Trust. They use the clippings to create mats (see pic below) that will then be used to soak up oil spills!! 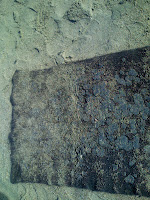 I’ve always wondered why so many Asian babies have flat head shapes?????????? Can anyone tell me????

jill said…
It was my understanding that in most asian cultures newborn babies were laid down on their back so the back of their heads developed that way. In western cultures, babies were more often laid on their bellies. I’m not so sure if these customs follow anymore. Truth or fiction, you decide.
March 27, 2009 8:00 AM

Anonymous said…
I’m not asian and I have this. Most babies these days sleep on their backs anyway..doesn’t matter if you’re asian or not. There has been research that babies who sleep on their stomachs have higher risk of cot death. SIDS are greatly reduced when the baby is put on its back. So a great majority should have flat heads..and people don’t. I think it’s genetic. My cousin does not have a flat head at all, and as a baby, he always sleeps on his back.
November 4, 2009 9:00 AM

Heres some good looking hair around town,
I’ll be updating this section every so often, so
if you think you have great hair and looks
and you think you should be included, forward
me a picture to my e-mail address:
jules@juleschan.com