Wanted to write a short article explaining what happens to hair during and after having a baby. (as witnessed by me over the years)

I would to make myself clear in saying that I am speaking ‘in general’ as these things do not happen to all women and sometimes nothing happens at all. You just cant explain what hormones will or will not do to a person ……

You’ve heard about how a woman ‘blossoms’ during her pregnancy, and this is partly due to her healthy hair and skin. Usually during pregnancy the hair becomes thick, fast growing and shiny.

After the baby is born, with some women this is when the hair starts to thin and hair loss happens around the front hairline… but most of the time this doesn’t happen until after breast feeding is finished, during this period the hair around the hairline can fall out causing a slightly thinner looking hairline,especially around the temples. And no your hairdresser did not cut it off!! (I’ve also heard this accusation too) It does eventually grow back, but not before you have that tough period of trying to hide or slick down those short stray hairs, In extreme cases the whole front hairline can end up falling out, I have seen such cases and it is always advisable after it has grown back out abit, to cut some kind of cute fringe in, so that it looks like it ‘meant to be’!

Here is Mina, who’s baby is now 18months old, she came to me with her hair all thin and wispy, the front area had started coming back but was still in its wispy stage.

We decided to cut her hair shorter so we could make it look thicker, and to bring the sides and front area much shorter to make it look more of a definite shape. We also brought out the waves more by drying it with a diffuser using a curl activating product. 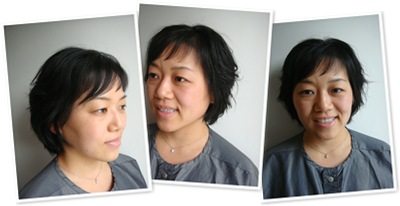